How to Install Fedora Workstation on a GeoBook 3X

I recently purchased a GeoBook 3X as an inexpensive laptop to bring with me on callouts instead of risking my HP Spectre. The GeoBook 3X is a particularly nice laptop for this because it has a spare M.2 slot accessible by a handy hatch on its base, it has no fan, the battery life is great, and it features a full HD screen behind an easy to clean glass panel (no touchscreen, but you’ll live). Overall it’s an impressively sturdy option compared to other laptops in its class such as the HP Stream etc.

I hadn’t found any guides online for getting Fedora up and running for this particular laptop so I thought I’d write this quick post to help anybody else out that might be in the same situation.

During my day-to-day work, I use Fedora. It’s very rare these days to have to do any additional tasks during a Linux installation on most systems in order to have all of the hardware working properly; normally everything works straight away which is amazing. However, some hardware still brings small quirks that need ironing out before everything can work perfectly. This GeoBook 3X is one of those exceptions, but don’t worry, it’s very straightforward!

In order to install a Linux distribution, you’ll first have to alter some UEFI settings.

Note: You can also disable the internal eMMC storage from the UEFI settings if you plan on upgrading to an M.2 SSD and using that instead. That’s what I’ve done with my GeoBook 3X and I strongly recommend it. I securely wiped the internal eMMC storage before disabling it personally, but you might want to leave it as-is before disabling it if you still have your factory installation of Windows on there or something. 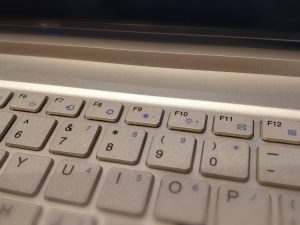 This is probably the section you visited this page for! The backlight controls on a GeoBook 3X are backwards up to now. This means that pressing Fn+F9 or Fn+F10 are reversed and also when the laptop goes into low power mode to save battery, the screen goes brighter instead of dimmer which is the exact opposite of helpful! The following is the solution you’ve been looking for:

This tells the bootloader GRUB to run all known kernels with the i915.invert_brightness=1 flag which fixes the backlight issues for this particular laptop.

If you’ve found this guide to be handy, please leave a comment. I love hearing when I’ve saved somebody a few hours of research and cut straight to the solution. Enjoy!

About the Author: James

The Coalville Computer Nerd. With many years of experience repairing computers for home users and small businesses, he prides himself on providing the best service possible to the local community!